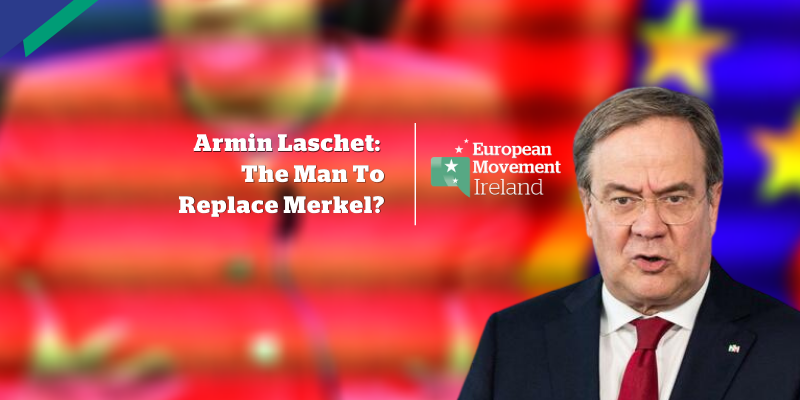 Germany’s Christian Democratic Union (CDU) held a virtual party conference to elect its new party chairperson on Friday and Saturday, 15 and 16 January, with Armin Laschet winning the vote. This Just the Facts explores the background to the vote, provides a profile of Laschet and assesses his chances of replacing Angela Merkel as Germany’s Chancellor.

Following poor performances in state elections and in national opinion polling, Angela Merkel decided in October 2018, not to stand for re-election as the leader of the CDU at the party congress in Hamburg that December.

Annegret Kramp-Karrenbauer, also known as AKK, then the Minister President of Saarland since 2011, won the 2018 leadership contest at the party conference. Saarland is the southwestern German state, bordered by France and Luxembourg. Subsequently, AKK was appointed Federal Minister for Defence in July 2019 by Angel Merkel, to replace Ursula von der Leyen when she became European Commission President.

However, AKK made a surprise announcement on 10 February 2020 to step down as chairperson following a political crisis in Thuringia. Close to the border with Czechia in the southeast, Thuringia is Germany’s smallest federal state.

The crisis arose when in October 2019, state elections resulted in a hung parliament in Thuringia. On 5 February 2020, Thomas Kemmerich, from the liberal Free Democratic Party (FDP), was elected Minister President with support from his own FDP, the CDU, as well as the far-right Alternative for Germany party.

This violated party policy of not allying with the far-right. By doing so, the actions of these CDU members defied AKK and undermined her authority over the party. This resulted in her stepping down five days after the vote in Thuringia, amid widespread national public outrage at the CDU’s actions.

A party conference was scheduled for April to elect a new chairperson but it was postponed until December and again until January 2021 due to the Covid-19 pandemic. Three candidates were on the ballot (all men, over the age of 50, Catholic and from North Rhine-Westphalia):

Laschet secured 52.79% of votes from the delegates in the run-off against Merz to become the new Chairperson of the CDU.

Who is Armin Laschet?

Born on 19 February 1961 to a Catholic family, he grew up in Burtscheid, a town in western Germany near Aachen, close to Belgium and the Netherlands. After studying law and political science at the University of Munich and University of Bonn in the early 1980s, he switched to journalism and worked in publishing and journalism from 1986 until 1994. He married Susanne Malangré in 1985 and they have three children. He speaks French fluently.

In June 2012 he became the CDU leader in North Rhine-Westphalia, before being elected in December as one of five CDU deputy chairpersons, alongside Ursula von der Leyen. Although a traditional stronghold for the centre-left, in state elections in May 2017, the CDU topped the poll under Laschet and entered government there for the first time since 2010.

As Germany’s most populous state (22% of the national population) and fourth biggest geographically, North Rhine-Westphalia is regarded as the country’s economic heartland.

In terms of personality, it is reported that he is “a usually jovial man with a friendliness associated with the Rhine region”. He has been described as a soft-spoken political moderate, with a reputation for pragmatism.

He has been described as the Merkel continuity candidate in the CDU leadership race, branding himself “as the safe, status quo candidate”. Indeed, he has been a faithful ally of Merkel, supporting her policy to keep the German border open during the 2015 refugee crisis for example.

Insisting on social cohesion and the social market economy, he has said that he stands for “a level-headed approach and avoiding extremes” and has supported a broad positioning of the CDU as mainstream party.

In terms of the EU, he has described himself as a dyed-in-the-wool European in the mould of Helmut Kohl, with further integration a priority for him. “We have to explain that more Europe makes everyone stronger […] it’s true for every goal we set.”

Laschet believes in increased Franco-German engagement and supports further EU enlargement in the Western Balkans, as, says “the alternative of leaving them outside would have greater consequences, none of which are good.”

With regard the US, he intends to push for more cooperation on climate and trade policy.

On China and Russia, it appears he will maintain Merkel’s approach of “a diplomatic dialogue on human rights that does not jeopardize commercial ties.”

Will Laschet be Germany’s next Chancellor?

That has yet to be decided.

Uniquely in German politics, the CDU is part of a single parliamentary group which it shares with the Christian Social Union (CSU), which is only active in Bavaria, the federal state in the south-east that borders Austria and Czechia.

Ahead of federal general elections, both the CDU and CSU agree to a single candidate to lead both parties and ultimately to become chancellor, which has traditionally been a person from the CDU.

In the 19 elections since 1949 that the CDU/CSU have nominated a joint candidate, on just two occasions has it been an CSU candidate, Franz Josef Strauß (1980) and Edmund Stoiber (2002). However, in both elections the party lost.

Also, as reported, after years of disagreements between the CDU and CSU, such as those around the 2015 refugee crisis, the assumption that Laschet will be the jointly agreed candidate is not certain. Although not on the leadership ballot, but very much considered to be in the running for the chancellery are:

A decision on the joint CDU/CSU candidate is expected in sometime in March or April following state elections in Baden-Württemberg, Rhineland-Palatinate and Hesse (14 March) and a possible early election in Thuringia (25 April).