Are Albania and North Macedonia ready for EU membership? 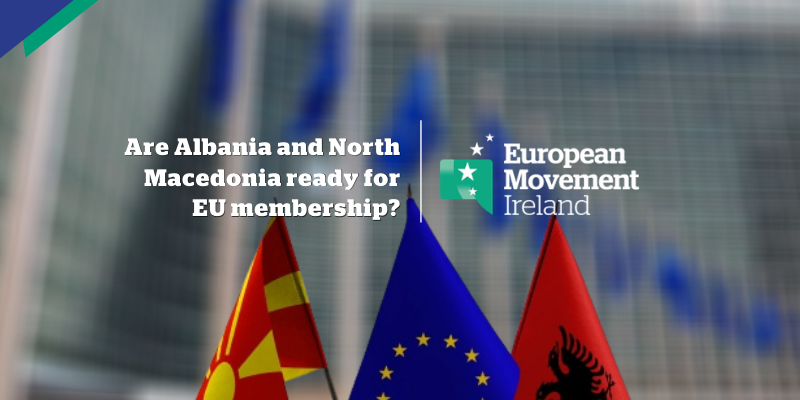 The recent opening of accession negotiations for Albania and North Macedonia represents a significant milestone in both countries’ paths to EU membership. In this Just the Facts, we will look at the challenges which the two applicants have overcome in order to reach this stage and outline the hurdles which remain.

Albania and North Macedonia have sought accession to EU membership since 2009 and 2004 respectively. EU Member States unanimously agreed to grant candidate status to Albania in 2014 and to North Macedonia in 2005.

Both the EU and the candidate countries stand to gain much from eventual enlargement. Albania and North Macedonia, who already each receive over €1.2 billion in EU funding from the Instrument for Pre-Accession Assistance (as well as other EU funding), having long perceived accession as a pathway to increased prosperity and stability.

Meanwhile, the EU has signalled that incorporating the Western Balkans is a priority, with certain European leaders citing recent increases in Russian and Chinese influence in the region as a motivating factor. However, despite this apparent political will for EU enlargement, the accession process is far from over.

Current Status and Next Steps 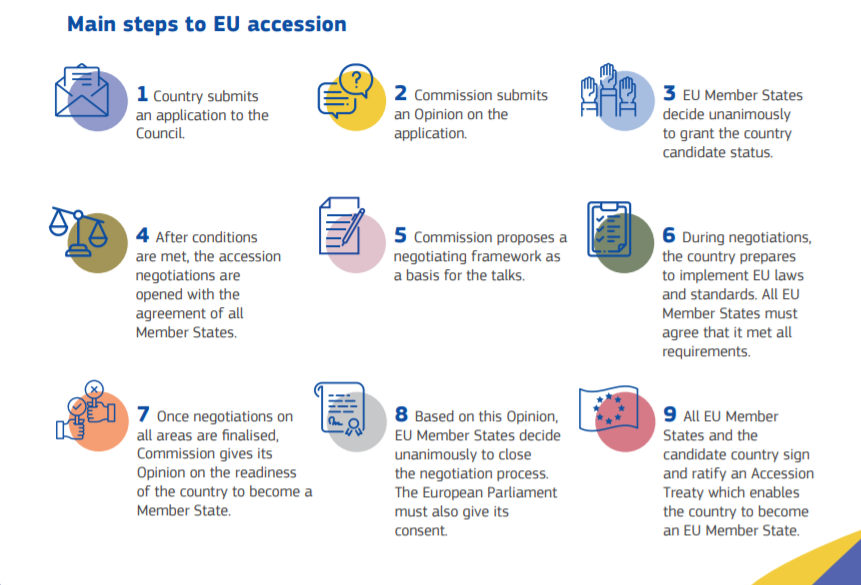 Ultimately, the objective of the negotiations is for Albania and North Macedonia to fully adopt, implement, and enforce the collection of common rights and obligations which all EU members are bound by (known as the EU acquis) before becoming Member States. Once all Member States agree to the negotiating framework, it will be presented to Albania and North Macedonia and will be made public.

During the negotiations, both countries are expected to prepare the implementation of EU laws and standards. Once all Member States agree that all requirements have been met, the Commission will give its opinion on the readiness of the candidates.

Based on this opinion, Member States must unanimously decide to close the negotiation process, with the consent of the European Parliament. Finally, all Member States and the candidate countries sign and ratify the Accession Treaty. However, there are many hurdles to be overcome before this can happen.

Albania must enact major reforms in order to adopt the acquis, and the EU has set out conditions which must be met before their first intergovernmental conference. These include passing significant electoral reforms, increasing the transparency of the financing of political parties and electoral campaigns, and depoliticizing the electoral administration and the new electoral system.

Before the first intergovernmental conference, Albania must also provide evidence of significant judicial reform. Further progress in the fight against corruption and organised crime is required, and laws relating to other topics such as population censuses and the media must be amended.

Unlike Albania, North Macedonia was not given any further preconditions to fulfil before their first intergovernmental conference. However, the European Commission was invited to monitor the continued progress of North Macedonia in areas previously identified by the Council of the EU in June 2018. These include issues around the rule of law, strength of democratic institutions, public administration, and economic development. Additional focus on reforming areas such as the judiciary, security and intelligence services, and media laws is also required.

As well as making satisfactory progress in these areas, North Macedonia has overcome other challenges to their application. These include a naming dispute whereby Greece claimed that the name of the Former Yugoslav Republic of Macedonia implied territorial ambitions regarding the northern Greek province of Macedonia.

This issue was resolved by the June 2018 Prespa Agreement, with Macedonia agreeing to change its name to the Republic of North Macedonia and Greece agreeing to stop blocking the accession process. North Macedonia has also had to work with Bulgaria in order to reduce historical linguistic tensions which exist between the two countries. Despite this progress, many challenges remain.

Cause for Cautious Optimism:

While then-President of the European Commission Jean-Claude Juncker stated in 2018 that Albania and North Macedonia could become Member States by 2025, this now seems an optimistic prediction. Given the current pandemic, there is the possibility that the EU may not prioritise expansion in the Western Balkans and France has signalled that internal EU consolidation (beginning with the Eurozone) is more pressing than further enlargement.

Indeed, in Ireland, further accession, while supported by the Government, has a cooler level of support from the wider public. According to the EM Ireland – RED C Poll 2020, 43% of Irish people believe that the EU should continue to allow more European countries to join as Member States, while 37% disagree.

However, far stronger support for EU enlargement comes from the candidate countries themselves. With over 85% of Albanians and 74% of North Macedonians being in favour of EU membership, there is cause for cautious optimism that the political will required to eventually result in them signing accession treaties.

The upcoming Council of the EU meeting of European Affairs ministers in November 2020 will discuss the state of play of enlargement for both candidates.