‘All has changed, changed utterly…. A terrible beauty is born..’

You are here:
EMI Blog 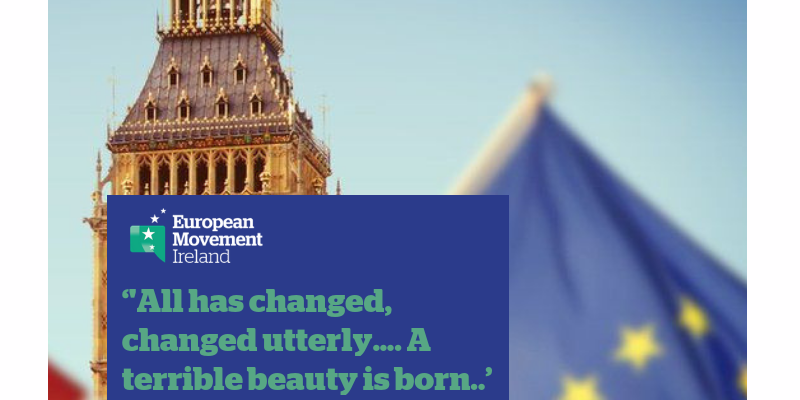 Just 10 days after what is fair to say, has been the single biggest political shock of my lifetime at and I find myself still with a sense of both profound personal and professional shock and sadness.  In a role reversal of the traditional break-up, this feels like, ‘it’s you, not us’, but yet we mean it when we say, ‘let’s still be friends.’

Like many people, I was fortunate to have spent some time living in the UK, in my case, studying in Scotland.  Like so many other Irish people, I also have friends, in my case of many different nationalities who are working and living in the UK.  That’s why I think for many of us here in Ireland, given the close personal ties between our two islands, the shockwaves felt by the UK referendum result are more acute here than in other European countries.

“It’s discouraging to think how many people are shocked by honesty and how few by deceit.”
Noël Coward said it best.

Politics and public discourse have become cheap, more populist and signify a wider race to the bottom. This coarsening dialogue has also become more present – And let’s be fair, not just in the UK.  Sound bites such as ‘Take back control,’ and ‘We have heard enough from experts,’ became the overarching rhetoric of a campaign that was nasty and very divisive.  In the midst of it all, a young female MP, Jo Cox, who was about to celebrate her 42nd birthday last week, was brutally murdered by a man allegedly shouting ‘Death to traitors, freedom for Britain.’; on the very same day that UKIP leader Nigel Farage, a Member of the European Parliament stood in front of THAT poster.

The United Kingdom is in very real danger of becoming a ‘disunited Kingdom’ amid a palpable backdrop of division, hurt, and anger among many sectors of British society.  Is the referendum result the culmination of a lack of engagement and disconnect due to the effects of long-standing regional economic disparity, made worse by the choices made during the period of austerity?  Wales, which receives more in EU Structural funding than any other region in the UK and has arguably suffered most, voted ‘Leave’.  Why?  The map of the referendum results showing the gap between age, sectors, class, and regions has been more than insightful with a clear sense of disenfranchisement felt by many.

A wake up call

The result has to be seen as a wakeup call.  We need to have the collective courage to consult constructively about the hard issues such as equality, access, immigration and trade deals.   The media have a responsibility to engage soberly in this process and not withstanding any legal or ethical need to provide balance, share a huge responsibility to make sure that facts prevail in all debates and coverage.

Family and friends have asked for my reactions to the referendum result.  Was I shocked?  Sadly yes.  Was I surprised?  Sadly no.  The UK and Ireland both joined what was then the EEC on 01 January 1973.  Along with everyone else aged under 43, I’ve never lived in either country where one or both was outside the EU.   We in Ireland have had 9 EU referenda.  Last week was only the UK’s second.  For the last 30 or so years, it’s no exaggeration to say that the EU political and public discourse in the UK has been characterised by a diatribe of anti-Brussels rhetoric and messaging by both the majority of British media and a preponderance of British politicians.  There are notable exceptions; however, as the fall-out from Friday’s results has shown, it’s an uphill battle to dispel decades of relentless and collective undermining in just 4 months.

What I do hope happens when the dust settles?  Now is not the time for petty vindictiveness or short-sighted, short-term ‘one-upmanship’ to rear its ugly head.  Once Article 50 is triggered, the clock starts.  There are many at an EU level who will quite honestly, not have been despondent at the UK vote to leave.  Good riddance is a phrase that may not translate as literally in other languages, but the meaning is the same.  For some, the UK voice at the EU level has been the awkward and critical obstructionist in the corner.  For others, including Ireland, the British voice has helped challenge the EU and has been a force for good more often than not.

So as we face up to this new fluid reality we find ourselves in, it’s not all doom and gloom.  Life goes on. Trade and business will still happen. The 30,000 or so people who cross the border every day for school, business, travel, shopping as part of their every day lives will still do so.

Let’s remind ourselves of the EU’s slogan, ‘United in diversity.’   Whatever the outcome, one thing is certain; the genie is out of the bottle.   No one would be brave (or foolish) enough to forecast what could happen in such a fluid and ever changing situation but it is a time for calm and cool heads as we navigate some very choppy waters ahead.