Who are the youngest leaders in the EU? 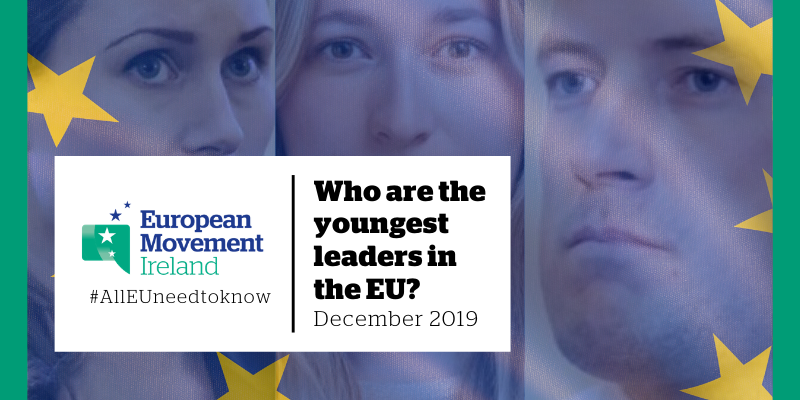 With the new Finnish prime minister holding the title as the youngest sitting prime minister in the world, this explainer will look at some of young politicians and officials who are shaping policy and politics in the EU today.

One of the unwritten rules of European political campaigns is that you should never bet on young voters, according to the European Council on Foreign Relations. While they may be promising sources of support for pro-EU parties, the argument goes that they rarely vote. Research by Magdelina Kitanova at the University of Southampton emphasises that “youth participation matters and the issue of youth disengagement continues to be a major one facing contemporary democracies.”

However, the higher turnout at the European Parliament elections in May this year was driven by a surge in youth participation, as highlighted in a post-election Eurobarometer survey. Higher turnout rates were found in those aged under 25 years (+14%), as well as those aged 25 – 39 years (+12%).

In addition to this, there has been a marked increase in young people getting involved in politics and running for office in recent years across the EU, North America, Africa and elsewhere. Here, European Movement Ireland looks at some of the youngest people involved in shaping the EU today.

Who is the youngest MEP ever elected? Meet Kira Marie Peter-Hansen.

Elected as an MEP at just 21 years-old, Kira Peter-Hansen made history in the European Parliament elections in May as being the youngest ever person elected to the institution, taking a seat for the Socialist People’s Party, a Danish left-wing green party. A student prior to being elected, Peter-Hansen has dropped out of her economics course at Copenhagen University, in order to focus on being an MEP. With a focus on green policies as an MEP, she told Euronews, that Europe “needs to be ready” for a green transition, “because if we do not fight the climate crisis, we may as well give up”.

In an article for the University of Copenhagen’s campus paper Uniavisen (in Danish), Peter-Hansen was asked if she is too young and inexperienced to be an MEP, she replied: “I don’t think people should be judged by their age, but by their actions. And then representation is important, and here the European Union is really lagging behind with young people!” For Euronews, she was asked how she was going to keep reaching young people and to keep them engaged. She explained that she wanted to visit high schools and use her Instagram account to “show how life is like beyond the big walls of the European Parliament”.

Who is the youngest European Commissioner? Meet Virginijus Sinkevičius.

At just 29, the new European Commissioner for Environment, Oceans and Fisheries, Virginijus Sinkevičius is the youngest ever commissioner. While in 2016 he would be the first government minister in Lithuania to be born after its re-establishment of independence in 1990, when he was appointed Minister of the Economy and Innovation in 2017.

Prior to pursuing a career in politics, he held positions at the state-run airport operator, the national postal service and Invest Lithuania, the government’s foreign investment promotion agency. He has also worked at the Washington-based Centre for European Policy Analysis.

A member of the Lithuanian Farmers and Greens Union (LVŽS), it is a centrist, agrarian party, that sit within the Greens/European Free Alliance group in the European Parliament.

At his hearing before the European Parliament, he won over MEPs with this bold ambitions and showed to be well versed in many environmental and fishery policy issues. He stated that “the latest wave of climate strikes shows that Generation Y and Generation Z are ready to take responsibility. Being a tiny part of this young generation, and a father, I am determined to take this path. For us, 2050 is not just a target on a piece of paper. We will have to live it.”

And who is the youngest sitting PM in the world? Meet Sanna Marin.

While at present she is the youngest sitting prime minister in the world, Sanne Marin (34) first entered politics in 2012 when she was elected to her home-town city council of Tampere, in the south of Finland. In her five years there, she gained a reputation as a tough, straight-talking operator aged twenty-seven.

A member of the Social Democratic Party, she was elected to the constituency of Pirkanmaa in 2015 and following re-election in 2019, she was appointed minister for transport and communication.

She is now Finland’s third female prime minister, having been approved by those in her Social Democratic Party. This follows former prime minister, Antti Rinne, resignation over his handling of ongoing disputes with postal workers. Further, the current coalition government of Finland includes five parties, four of which are led by women.

While asked about her age after it was announced that she would be prime minister, Marin repeated what she has said before: “Age doesn’t matter. I have not actually ever thought about my age or my gender,” she said, according to the national news outlet YLE. “I think of the reasons I got into politics and those things for which we have won the trust of the electorate.”

The coalition agreed in June to continue their policy programme, that includes major increases in public spending on welfare and infrastructure, and a pledge to make the country carbon neutral by 2035. However, she admitted that the new government had “a lot of work to do to rebuild trust”. Her party currently stand at 13% in the polls, behind the nationalist Finns Party on 24%.