‘All EU Need To Know’: UK Politics, EU Preparations, and a No Deal Brexit 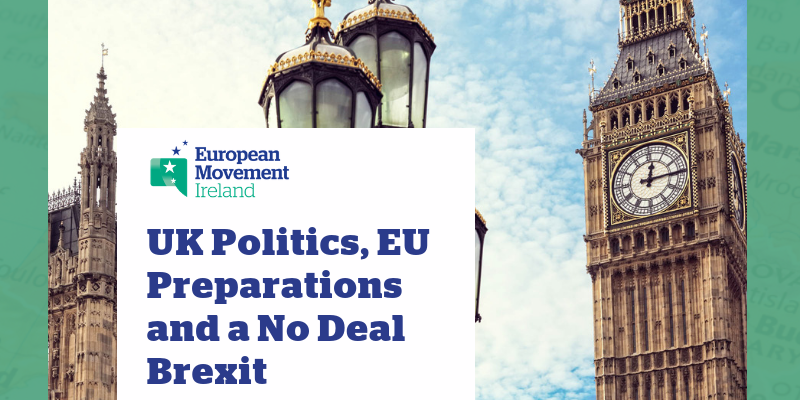 With only 30 days until 29 March, the current official date for Brexit, both Ireland and the EU are preparing for a very undesirable but still-possible outcome: that the United Kingdom would leave the EU without ratifying the EU-UK Withdrawal Agreement. Without that agreement, there would not be the legal arrangements in place (as today) to ensure a smooth continuity of current socio-economic relations. No one can be certain how a “no deal Brexit”, as it is commonly called, would work in practice. However, most experts agree that there will be disruption to trade and people flows between the EU and the UK – just how much disruption remains to be seen.

Political machinations at the UK Parliament this week suggest that a no deal Brexit may, at the very least, be delayed until perhaps the end of June, but not entirely ruled out. Ireland and the EU, therefore, must continue preparing for this possibility. The Irish and EU emergency-response measures briefly outlined below, indicate just how exposed Ireland would be in the event of a no deal Brexit – economically, socially, and politically – and show how important EU support would be to help Ireland cope.

Currently both UK and EU law state that a no deal Brexit at the end of March is the default option if the UK Parliament does not ratify the UK-EU Withdrawal Agreement before then. This week UK Prime Minister Theresa May committed to holding another “meaningful vote” on the Withdrawal Agreement by 12 March. If Westminster rejects the Withdrawal Agreement (again), then the UK PM has committed to Parliament voting the following day (13 March) on whether – or not – to rule out leaving on 29 March without a deal. If most MPs support ruling out an immediate no deal Brexit, they would then have an opportunity to vote on 14 March in favour of the UK government seeking an extension of the Brexit negotiations.

If the UK government were to ask for an extension of the Brexit negotiations, the 27 remaining EU governments would need to agree to this unanimously at a summit on 21-22 March. The President of the European Council (who chairs those inter-governmental summits), Donald Tusk, said on Monday that he believed, given the current situation in the UK, “an extension would be a rational solution” and that if PM May were to ask for one “the [EU]27 will show maximum understanding and goodwill”.

The EU-27 want to avoid a no deal Brexit, but should the UK government request an extension, they will be keen to know what exactly the extension is meant to achieve, and the appropriate length of time. Some political observers have suggested that the political impasse over Brexit in the UK is so great, that it would need a long “political extension” of up to two years, to build a sustainable political consensus on the UK’s future path (and to allow for a general election and/or another referendum if necessary).

However, any extension beyond 1 July creates decision-making problems for the EU.  Newly elected Members of the European Parliament (MEPs) will take their seats on 2 July.  The consensus among legal commentators is that if the UK were to ask for an extension beyond 1 July, the country would need to participate in the European Parliament elections taking place across the EU on 23-26 May.  Thus, many in the EU much prefer a short “technical extension”, up to 1 July latest. This would both give the UK more time to ratify the Withdrawal Agreement, and avoid the UK having to participate in European Parliament elections. But it would only postpone the no deal “cliff edge” from 29 March to 1 July, meaning that the prospect of a no deal Brexit would still loom at the end of June.

The Irish government published the “Brexit Omnibus Bill” on 22 February 2019. The Bill is designed to prepare Ireland for the prospect of a disorderly or no deal Brexit, and is being debated at the Dáil this week.  It comes on top of other national Brexit contingency efforts, such as improving seaport preparedness at Dublin and Rosslare, hiring extra customs staff (some 400 more are planned to be in place by the end of March), and funding at least €600million in financial support packages for businesses.

The Omnibus Bill, as the name implies, introduces a number of laws to cover the sheer breadth of sectors that would be impacted by the UK crashing out of the EU. It is comprised of 15 parts, changes 36 existing laws and falls under the responsibility of nine different Government Ministers (normally Bills are introduced by just one Government Minister).

The Omnibus Bill introduces provisions to cover areas of cross-border co-operation on the island of Ireland, such as bus and train services, health services, the All-Island Single Electricity Market, extradition and immigration.  This is because the legal foundation of these current arrangements will be altered if the UK leaves the EU without ratifying a Withdrawal Agreement.  The Bill also covers other agreements between Ireland and the UK which would be affected by a no deal Brexit, for example taxation, financial services, and arrangements to continue support for Irish students studying in the UK and vice versa.

An Tánaiste and Minister for Foreign Affairs, Simon Coveney TD stated, when launching the Bill alongside Minster of State for European Affairs Helen McEntee TD, that he hopes that the legislation “sits on a shelf” and will never need to be used as a no deal Brexit would be “a lose, lose, lose for the UK, for Europe and for Ireland”.

Perhaps the most politically contentious question after a no deal Brexit, is where would the customs border between Ireland/EU and the UK be located? Leaving the very challenging politics aside, from a purely practical viewpoint, there can only be three basic options.

The first option would be based on the “backstop” arrangements in the December 2017 EU-UK Joint Report, with customs (and other regulatory) checks carried out at seaports between Great Britain and Northern Ireland. There are already GB-NI checks on livestock, for example, as the island of Ireland is currently treated as one sanitary and phytosanitary (SPS) unit.

The second option would be to re-introduce customs checks on, or near, the 500km-long elongated land border between Ireland and Northern Ireland. There was such a customs border on the island from 1923 until 1993, when the need for customs checks was removed because of the establishment of the EU’s single market – a major development in European cooperation that both the UK and Ireland strongly supported as EU members.

The third option would be to introduce customs checks between Ireland the rest of the EU, at continental seaports such as Cherbourg, Zeebrugge or Rotterdam. This would effectively mean that Ireland would no longer be a member of the EU Single Market, instead de facto classified like the then-exited UK as an outsider (a “third country” in the jargon).

In addition, there would be disruption to existing Ireland-UK East-West trade, which is worth around €40bn a year. More concretely, some 1,300 trucks and trailers pass through Holyhead port from Dublin each day, and would require new checks in a no deal Brexit.

The European Commission has been helping the 27 remaining national governments, including Ireland, prepare for a no deal Brexit since December 2017. During last year, for example, the Commission published over 80 “Brexit Preparedness Notices” covering a wide range of specific areas, from banking and insurance to medicines and intellectual property. It also published a contingency action plan in November 2018, containing temporary emergency measures to ensure basic continuity – as much as possible – between the EU and the UK, in important areas for Ireland such as air transport (for twelve months) and road haulage (for nine months).

In addition, the Commission’s contingency plan says that it “will support Ireland in finding solutions addressing the specific challenges of Irish business.” These measures would likely include financial subsidies to compensate sectors most exposed to new trade barriers to the UK market, such as agriculture, as well as temporary flexibility on EU rules like those covering state-aid to businesses, to allow the Irish government support those most badly affected by a no deal Brexit.

Furthermore, the Commission has reiterated its determination to continue supporting the peace process in Northern Ireland in the event of a no deal Brexit, specifically through the “PEACE programme” which is funded from the EU budget. Since 1995, the EU has spent over €1.5bn on peace-support programmes in Northern Ireland.