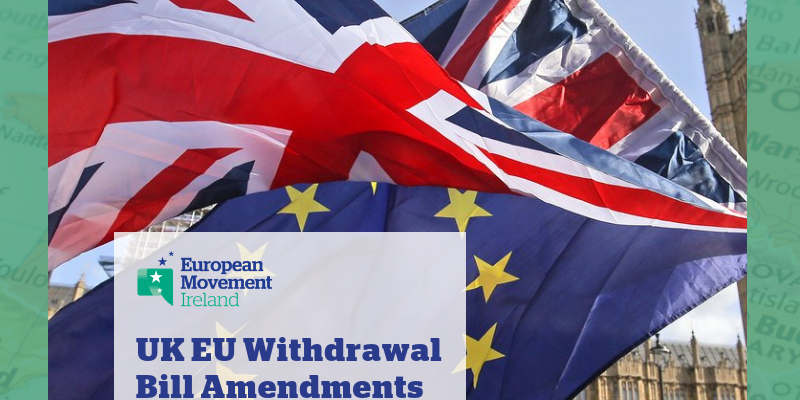 What is the EU Withdrawal Bill?

The European Union (Withdrawal) Bill is currently being debated in the UK Houses of Parliament.  Effectively, it seeks to copy EU law into UK law, meaning that after the UK’s withdrawal from the EU, all EU legislation would remain in force as domestic legislation, unless it is amended or repealed by the UK.

When first introduced, it was sometimes referred to as the Great Repeal Bill, as it seeks to repeal the 1972 European Communities Act.  This Act brought the UK into the European Economic Communities (EEC) and ensured that existing EU legislation was copied into domestic legislation.

What stages has the Bill gone through?

The EU Withdrawal Bill was first introduced to the House of Commons by the UK Secretary of State for Exiting the EU, David Davis MP, on 13 July 2017.  The Bill was debated in the House of Commons and changed by MPs on 13 December 2017 to give the UK Parliament a ‘meaningful vote’ on any withdrawal agreement reached between the EU and UK.  This amendment, proposed by backbench Conservative MP and former Attorney General, Dominic Grieve, gave the UK Parliament a legal guarantee of a vote to approve any withdrawal deal.  However, it did not set out a timeline for when this vote should take place or a course of action should MPs reject the deal.

With this change to the Bill, MPs voted to approve it and passed it to the House of Lords.

In the House of Lords, the UK government suffered 15 defeats when Peers voted against the UK government to alter the Bill.  These amendments covered a wide range of issues from a customs union with the EU to UK membership of the European Economic Area (EEA).

The House of Lords also altered the Bill to set out specific deadlines for a ‘meaningful vote’.  It sought to give the UK Parliament greater influence in the Brexit negotiations by proposing a series of deadlines for a vote in the event of either a withdrawal agreement being reached between the EU and UK, or of one not being reached by a specific date.  The amendment also gave the UK Parliament the power to direct the UK government in the negotiations should these deadlines not be met or should MPs reject the withdrawal agreement.

What is the ‘Grieve’ amendment?

Specifically, the ‘Grieve amendment’ sets out that:

The UK government negotiated a concession with Conservative backbenchers who had indicated that they may vote against the government on this ‘Grieve’ amendment.  The ‘Grieve amendment’ was therefore withdrawn and the House of Lords amendment on a ‘meaningful vote’ was rejected by MPs: 324 to 298.

However, ‘Conservative rebels’ appear to be unhappy with the UK government’s proposed translation of this concession into the Bill, and the ‘Grieve amendment’ is therefore likely to be passed in the House of Lords and returned to the House of Commons to vote on.

Conservative Peer, Lord Patten proposed an amendment which called explicitly for the preservation of North-South co-operation after Brexit and prevents the establishment of new border arrangements which did not exist before the UK’s withdrawal from the EU, unless agreed between the UK and Irish governments.

The UK government proposed an amendment in lieu which altered the wording of the House of Lords’ amendment to refer to North-South co-operation “provided for by the Belfast Agreement [Good Friday Agreement]”and so that changes to the border could only be made as a result of an agreement between the EU and UK.  The UK government also reduced the list of new border arrangements to propose that changes to the border only applied to “physical infrastructure including border posts, or checks and controls”.  The amendment was then passed by MPs.

What about the other Lords’ amendments?

The government also accepted the ‘continued co-operation’ amendment act which sets out that, in terms of UK law, the UK could continue to participate in EU Agencies post-Brexit.  All other UK government defeats in the House of Lords were reversed by the House of Commons.

What happens to the Bill now?

The Bill will now return to the House of Lords on Monday, 18 June for the Peers to consider the House of Commons proposals on the amendments.  The Bill may go back and forth between the Houses until an agreement on a final version is reached, a process known as ‘ping pong’.