‘All EU Need To Know’: The Multiannual Financial Framework (MFF) 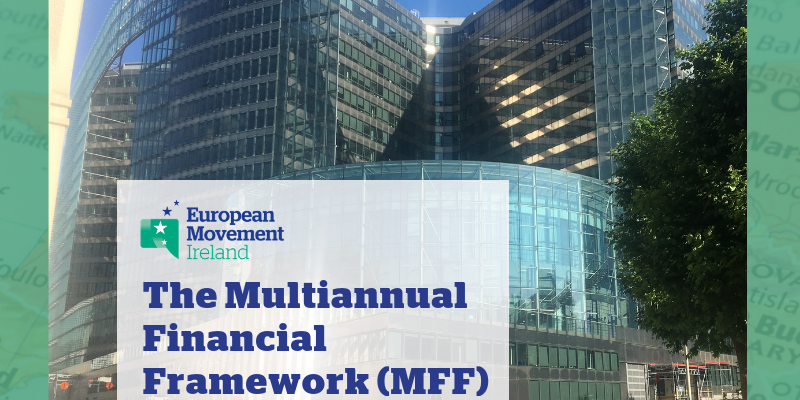 The Multiannual Financial Framework (MFF) sets out the long-term budget of the European Union (EU).  Policy priorities are outlined for a minimum period of five years, with recent MFFs covering seven years, and under each policy priority heading, spending ‘ceilings’, maximum annual amounts that can be spent, are agreed.  The current MFF covers the period 2014-2020.  On 2 May 2018, the European Commission issued a proposal for a new MFF for 2021-2027, with a proposed mid-term review in 2023.  This proposal is currently undergoing negotiations in the European Parliament and the Council of the EU.

The concept of a Multiannual Financial Framework (MFF) was developed in the 1980s with the aim of improving EU budgetary discipline and implementation through an inter-institutional agreement between the European Commission, the European Parliament and the Council of the European Union (EU).  The first such agreement was a five-year framework developed for 1988-1992.  The MFF became a legally binding act in 2009 when the Treaty of the Functioning of the European Union (TFEU) was amended with the adoption of the Lisbon Treaty.

Prior to the publication of the 2021-2027 MFF proposal, EU Budget Commissioner, Günther Oettinger, travelled across Europe to listen to the views of national governments, visiting Ireland on 6 March 2018.  Following these consultations, on 2 May 2018, the European Commission issued its MFF proposal for the 2021-2027 period entitled “A Modern Budget for a Union that Protects, Empowers and Defends” with a proposed €1,135 billion in commitments to be pledged by Member States (expressed in 2018 prices), equivalent to 1.11 per cent of the EU27’s gross national income (GNI).  While the 2014-2020 MFF contained five policy priority headings, this proposal contains seven, although the number of spending programmes has decreased in an effort to simplify the EU budget and align it closer to the EU’s policy priorities.  Spending programmes are used to implement EU policy through the allocation of EU funds in different areas.  The European Commission aims to increase flexibility between programmes so that the EU can “respond quickly and effectively to unforeseen demands” in an “unstable geopolitical environment”.

‘Cohesion and Values’ is the largest proposed policy priority heading, covering programmes such as the European Regional Development Fund, the European Social Fund+, and the Cohesion Fund.  The European Commission has also proposed to nearly double the size of the Erasmus+ programme and to increase the European Solidarity Corps, the EU initiative which gives young people the opportunity to volunteer and work on projects that help communities around Europe.

The European Commission has also proposed to reform and modernise the Common Agricultural Policy, using a budget of €365 billion to “support the transition towards a fully sustainable agricultural sector and the development of vibrant rural areas”.  A significant increase in funds has been proposed for migration policy and border control, to invest in “a comprehensive approach to the managing of migration” and “strengthening the management of external borders” in light of the ongoing migration and refugee crisis.

As the United Kingdom intends to leave the EU on 29 March 2019, this will have a negative financial impact on EU funds.  The European Commission addresses this budgetary gap in its proposal by stating: “Maintaining a level of support that matches our ambitions across the priority areas will require additional contributions from all Member States in a fair and balanced way.”

In his address to the European Parliament on 17 January 2018, Taoiseach Leo Varadkar TD stated “In recent years Ireland has moved from being a net beneficiary of the EU budget to a net contributor.  Nonetheless, we are open to contributing more, but only if it is spent on things that contribute to the advancement of the European ideal”.

On 14 November, the European Parliament adopted its Interim Report on the MFF proposal, in which it estimated that the MFF ceiling should be increased to 1.3 per cent of EU27 GNI, or €1,324 billion in 2018 prices.

On 11 December, the Austrian Presidency of the Council presented a draft Negotiating Box to the General Affairs Council (GAC), which will be used to structure MFF negotiations and to facilitate discussion on individual issues.  The Negotiating Box is updated continuously through the negotiating process.

EU leaders exchanged views on the MFF proposal at the European Council Summit on 13-14 December.  In their conclusions, the European Council stated they would like to see an agreement reached on the MFF by autumn 2019, and called on the incoming Romanian Presidency of the Council of the EU to “develop an orientation for the next stage of the negotiations”.