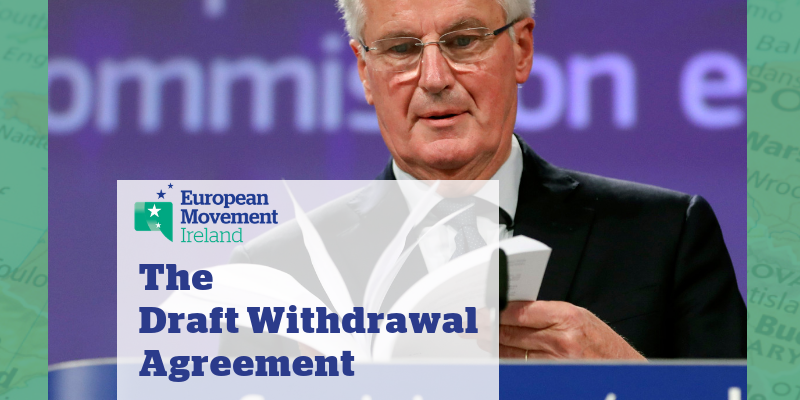 The draft withdrawal agreement runs to 585 pages in length and covers the three issues which were prioritised in the European Council’s guidelines for the negotiations “so as to reduce uncertainty and, to the extent possible, minimise disruption caused by this abrupt change”. These were citizens’ rights, the financial settlement and the unique circumstances on the island of Ireland.

What is in the Draft Withdrawal Agreement?

The rights of citizens have been a top priority of both the EU and the UK during the Brexit negotiations. Currently, there are over three million EU citizens residing in the UK, and over one million UK nationals residing in the other 27 Member States.

The draft withdrawal agreement safeguards the rights of all EU citizens who were residing in the UK and all UK nationals who were residing in one of the EU27 Member States by the end of the transition period. Citizens who fit this category and their family members will maintain the existing residency and workers’ rights that they currently enjoy under EU law. They will also maintain their right to healthcare, pensions and other social security benefits.

The Court of Justice of the EU will give preliminary rulings to national courts on any issues relating to citizens’ rights, with the final judgement resting with the national court.

The draft withdrawal agreement sets out the financial settlement agreed between the EU and UK.

Negotiators have agreed that the UK will honour its financial commitments to the EU budget for the years 2019 and 2020. The UK will also be responsible for contributing to “its share of the financing of the Union’s liabilities incurred until 31 December 2020”, for example in areas such as outstanding loan payments and the pension benefits of EU officials accrued before 31 December 2020.

The UK’s Office for Budgetary Responsibility has estimated that the UK’s total financial settlement will amount to approximately €40 billion.

The unique circumstances on the island of Ireland

The aim of avoiding a hard border on the island of Ireland has been perhaps the most intractable issue in the withdrawal negotiations, given the UK government’s stated intention of leaving both the EU’s Single Market and Customs Union.

In the Joint Report on the first phase of negotiations produced in December 2017, the EU and UK agreed in principle to a ‘Backstop’ for Northern Ireland.  The Backstop set out that a hard border on the island of Ireland would be avoided through Northern Ireland effectively remaining in parts of the EU Single Market and Customs Union.  It would do so ‘unless and until’ another solution was found.  However, following concerns voiced by the UK that the Backstop would create a customs barrier between Great Britain and Northern Ireland, negotiations have since focused on agreeing the details of this Backstop arrangement.

The draft withdrawal agreement sets out what EU Chief Brexit Negotiator, Michel Barnier has termed an ‘evolved’ Backstop solution for Northern Ireland.  The Protocol on Ireland/Northern Ireland sets out that both parties aim to avoid the Backstop coming into play through agreement of alternative arrangements as part of the negotiations on the EU-UK future relationship.

However, until these arrangements are agreed, after transition Northern Ireland would maintain alignment with the rules of the EU Single Market needed to continue North-South co-operation and ensure no hard border on the island of Ireland.  The UK government would also apply the European Union’s Customs Code (UCC) in Northern Ireland.

In the ‘evolved’ Backstop agreement detailed in the Protocol, the Northern Ireland specific elements of the Backstop would be underpinned by what Mr Barnier has described as the creation of an “EU-UK single customs territory”.

Mr Barnier has said that this will “mean that UK goods get tariff and quota free access to the EU27 market.”  In order to ensure a level playing field for manufacturers across the EU and UK, negotiators have also agreed “provisions on state aid, competition, taxation, social and environmental standards”.

The Protocol sets out a ‘review mechanism’ for the Backstop, which states that if either the EU or the UK believe the Backstop to be “no longer necessary…it may notify the other party, setting out its reasons”.  A Joint Committee set up to govern the withdrawal agreement would then rule on whether the Backstop is still required or whether alternative arrangements put forward achieve the stated aim of protecting North-South co-operation and avoiding a hard border.

The draft withdrawal agreement establishes that after the UK leaves the EU, it would relinquish its voting rights but stay within the EU Single Market and the Customs Union for a transitional period while negotiations on the future EU-UK relationship take place.  During the transition period, the UK would continue to apply the EU acquis in full.

EU and UK negotiators have agreed that this transition period will end on 31 December 2020.  However, the draft withdrawal agreement also sets out that, if both sides agree, the transition period can be extended once for an unspecified amount of time.

In order to ensure its effective implementation and enforcement, the draft withdrawal agreement includes arrangements for a dispute settlement mechanism to resolve any potential disagreements that may arise regarding its interpretation.

It outlines that in the event of a dispute, both parties should attempt to resolve it by “entering into consultations in the Joint Committee [of the EU and the UK] in good faith, with the aim of reaching a mutually agreed solution”.  Should the Joint Committee, established by the withdrawal agreement, be unable to find a solution within three months, the issue can be referred to an independent arbitration panel, whose ruling will be legally binding on both the EU and the UK.  If the issue relates to EU law, the panel will be required to refer the issue to the Court of Justice of the EU, which has the final say on all matters related to EU law.

Other issues covered by the draft withdrawal agreement include Protocols on the British Overseas Territory of Gibraltar and on the Sovereign Base Areas (SBA) in Cyprus; intellectual property rights; and administrative and judicial arrangements.

EU-UK negotiators are still agreeing the terms of this declaration.

How is the Withdrawal Agreement ratified?

Following the reaching of an agreement between EU and UK negotiators on the terms of the UK’s withdrawal, the European Commission, in its role as negotiator on behalf of the EU, recommended to the European Council that decisive progress had been made in the Brexit negotiations.  Donald Tusk, President of the European Council has since scheduled a summit of EU leaders for Sunday 25 November, where EU27 leaders will meet to discuss the draft withdrawal agreement and are expected to politically endorse the agreement.

On the EU27 side, the withdrawal agreement would have to be approved by the European Parliament, with a simple majority needed to pass it.  The last European Parliament plenary during which Members of the European Parliament (MEPs) could do so is during its sitting from 11-14 March 2019.  To ratify the deal, the Council of the EU will then need to conclude and approve the withdrawal agreement through a strong qualified majority vote.  This means that at least 72 per cent of EU countries would have to agree to the divorce terms, which would amount to 20 of the 27 EU countries after the UK leaves.  These countries would need to make up at least 65 per cent of the population of the EU, or account for around 290 million people of the EU’s population without the UK.