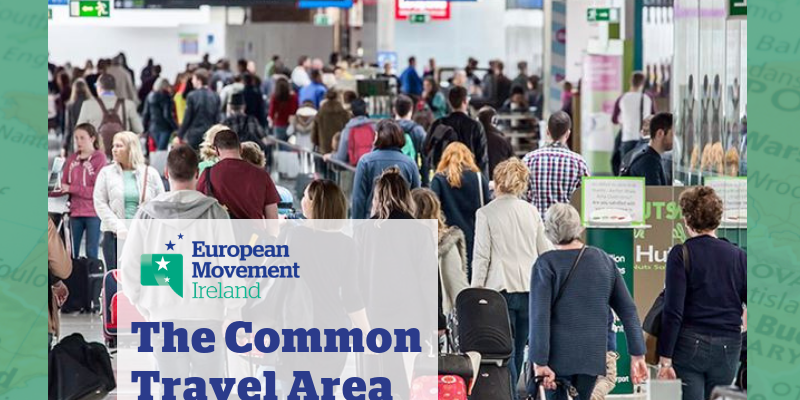 What is the Common Travel Area?

The Common Travel Area (CTA) is an open borders area comprising the UK (including the Channel Islands and Isle of Man) and Ireland. Within the CTA, Irish and British citizens can travel freely with minimal controls at borders.  The CTA tends to be associated as well with the ‘special status’ afforded to Irish nationals resident in the UK and UK nationals resident in Ireland.

For example, Irish citizens entering the UK from within the CTA are treated as if they have permanent permission to remain in the UK from the date they take up ‘ordinary residence’ there, and UK citizens are entitled to live in Ireland without conditions or restrictions.  As part of the ‘special status’ of Irish citizens in the UK, Irish citizens over the age of 18 and resident in the UK had the right to vote in the UK’s EU referendum in 2016.

When and why was the Common Travel Area established?

The CTA has been in operation since 1923 and is linked to the establishment of the Irish Free State. The CTA therefore pre-dates Ireland and the UK’s membership of the EU, both countries having joined the then European Economic Communities (EEC) only in 1973.

In written evidence to the UK House of Lords European Union Committee, Professor Bernard Ryan has explained its establishment:

The CTA was suspended in 1939 following the outbreak of the Second World War, immigration controls applied to travel between the islands of Ireland and Great Britain. In 1952, the CTA was restored following an administrative agreement between Ireland and the UK.

How is the Common Travel Area legislated for?

Despite its long existence, the first legal recognition of the CTA came when the Treaty of Amsterdam entered into force in 1999.  A special protocol annexed to the European Treaties at the time of the Amsterdam treaty confirmed that Ireland and the UK would not be part of the Schengen area of open borders.  The Protocol also provided that the two states could “continue to make arrangements between themselves relating to the movement of persons between their territories (the Common Travel Area)”.

In Irish immigration law, any person who is not an Irish or British citizen is classed as a ‘non-national’, while Irish nationals have a special status in UK law which pre-dates and is distinct from their rights as EU citizens.

What does the Common Travel Area allow?

Irish citizens and UK citizens hold a number of rights in each other’s countries due to reciprocal arrangements made between the UK and Ireland which are associated with the CTA.

These include: the right to freely enter and live in each other’s state; the right to work without needing to get a work permit; access to social welfare entitlements benefits, social housing and health services; and the ability to vote in and stand in local and parliamentary elections.

Will the Common Travel Area continue after Brexit?

Both the Irish and UK governments have stated their commitment to maintaining the CTA post-Brexit.

Reacting to the UK’s vote to leave the EU on 24 June 2016, then-Taoiseach, Enda Kenny said: “The Irish Government will do our utmost in upcoming discussions to maintain the Common Travel Area and minimise any possible disruptions to the flow of people, goods and services between these islands.” While, UK Prime Minister, Theresa May said in her speech at Lancaster House in January 2017, that maintaining the CTA was “an important priority for the UK”.

EU and UK negotiators have agreed that CTA arrangements between Ireland and the UK can continue after Brexit.  The Joint Report released in December 2017 states that: “Both Parties recognise that the United Kingdom and Ireland may continue to make arrangements between themselves relating to the movement of persons between their territories (Common Travel Area).”

Taoiseach, Leo Varadkar has also stated recently that he is confident the CTA will be maintained post-Brexit:

“Nothing is agreed until everything is agreed. However, I am confident that, no matter what happens, the Common Travel Area will remain in place . . . The European Union has taken the view that we can continue that.”