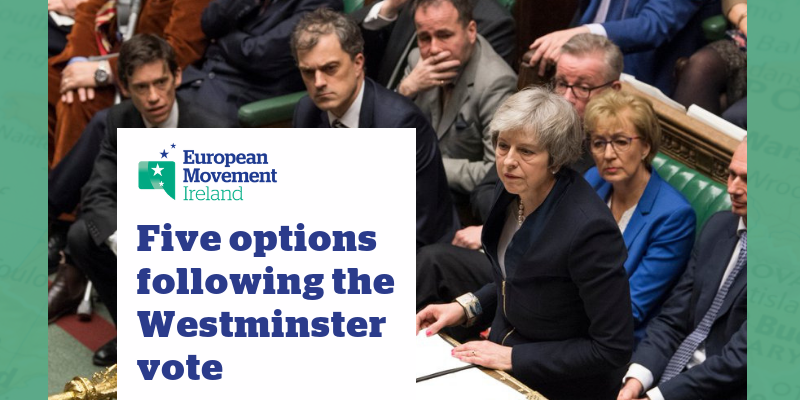 “We can choose to leave with no deal, risk no Brexit at all or choose to unite and support the best deal that could be negotiated”, UK Prime Minister Theresa May told the House of Commons on 15 November 2018.  That was just before the special summit where, after 18 months of negotiations, the UK and the EU settled on a withdrawal agreement.

A ‘meaningful vote’, as required under UK law, was held yesterday (15 January 2019), with MPs rejecting the Withdrawal Agreement (and the accompanying Political Declaration) by a whopping 432 to 202.  The UK government must now table a motion on or before 21 January, setting out its subsequent plan of action.

There are at least five options which the UK could choose, some of which are more procedurally straightforward than others – and all options are politically complicated.

This is now the default position under both UK and EU law. Unless Article 50 is either extended or revoked – or the Withdrawal Agreement passes after another vote, the UK will leave the EU at midnight (CET) on 29 March 2019.

The Court of Justice of the European Union (CJEU) recently ruled that a Member State can unilaterally revoke Article 50, meaning the UK could choose to cancel Brexit.  However, a revocation should be for the firm intention of remaining in the EU, not simply reconsidering an exit, according to some legal experts, based on the principle of ‘sincere co-operation’.

Another vote on the Deal

Alternatively, PM May could ask the EU to renegotiate the Political Declaration, a non-legally binding document outlining the future UK-EU relationship – that accompanies the Withdrawal Agreement.  For instance, a stronger commitment towards a permanent UK-EU customs union might garner a majority at Westminster (the main opposition Labour supports this objective). Moreover, Michel Barnier, the chief EU Brexit negotiator, has already indicated that the EU would be open to this.

It currently seems likely that the UK will need more time to decide on its future course of action, and it could ask the EU for an extension of the negotiations, which would require unanimous agreement of the EU-27. While a short extension shouldn’t be too problematic, a longer extension period could provide difficulties for the EU.  European Parliament elections will be held during May 2019: an extension beyond this date raises the question if and how the UK would participate in these elections.

General Election or a Cross-Party Majority

Following yesterday’s heavy defeat at Westminster, the opposition Labour party has tabled a motion of no confidence in the government. This is expected to fail, so a general election seems unlikely for the time being (but if one occurred it would likely require an extension of Article 50 negotiations). To avoid a no deal exit, PM May might try to build a cross-party coalition to support a revised political declaration, given Labour’s support for a permanent customs UK-EU union.

A more extreme version of this approach, would be to form a cross-party, national government in order to decide and implement the UK’s next steps – but this is unprecedented in recent peace time UK parliamentary history.

If Westminster is unable to break the Brexit impasse, Parliament could ask the UK electorate to decide if or how the UK should leave the EU.

To enact this, legislation would need to be introduced by the UK government and approved by Parliament.  The question and exact wording of the referendum would also need to be determined, as well as the number of options voters would be given on the ballot paper.

If another referendum were to take place, the UK would need to request a significant extension of Article 50, perhaps for as long as another year.

The clock is ticking

Of these five options open to the UK, procedurally no deal remains the simplest scenario, as it does not require MPs to even vote on it.  All the other options outlined above would require additional procedural steps, with MPs needing to find a majority for a specific option, and, in most cases, a UK government willing to implement the chosen option.

The time left for Westminster to choose, though, is running out…