‘All EU Need To Know’: EFTA and The EEA Agreement 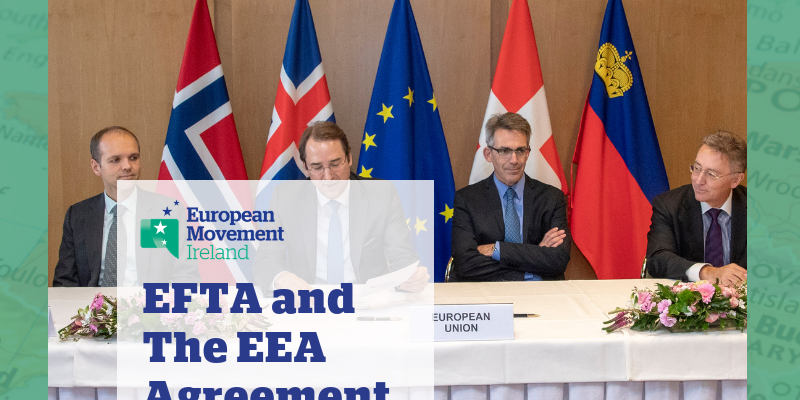 The term ‘Norway Plus’ has recently entered the discussion on Brexit, with advocates of this proposal suggesting it as a model for the UK’s future relationship with the EU.  In our latest ‘All EU Need to Know’ we explain what the European Free Trade Association and the EEA Agreement are, as well as what ‘Norway Plus’ means.

What is the European Free Trade Association (EFTA)?

The European Free Trade Association (EFTA) was established on 3 May 1960 following the signing of the Stockholm Convention on 4 January 1960.  Its purpose was to serve as an alternative trade bloc for those European states that were unable or unwilling to join the then European Economic Community (EEC), now the European Union (EU).  The seven founding members of EFTA were known as the ‘Outer Seven’ as opposed to the ‘Inner Six’ that made up the EEC. These seven members were: Austria; Denmark; Norway; Portugal; Sweden; Switzerland; and the United Kingdom (UK).

What is the EEA Agreement?

In order to extend the EU’s Single Market to EFTA states, the European Economic Area (EEA) was established in 1994.  Of the four EFTA states, Iceland, Liechtenstein and Norway are a part of the EEA while Switzerland is not.  Instead, Switzerland has a series of complex bilateral agreements with the EU.

The EEA incorporates the four freedoms of the Single Market (free movement of goods, people, services and capital).  Additionally, the EEA Agreement covers areas such as social policy, consumer protection, environment, company law and statistics.  All relevant legislation relating to the Single Market is integrated into the EEA Agreement so that it applies throughout the whole of the EEA.  In order to guarantee equal conditions of competition throughout the EEA, the EEA Agreement mirrors the competition and state aid rules of the EU treaties.  It also provides for participation in EU programmes such as Erasmus+ and Horizon 2020, and in turn the three EFTA states who are part of the EEA make significant financial contributions to the EU.

What is the difference between EFTA and EU membership?

One of the main differences between EFTA and EU membership is that EFTA members are not part of the EU Customs Union.

As EFTA states are not part of the EU Customs Union, they negotiate trade deals separately to the EU.  As a bloc, they have negotiated 26 Free Trade Agreements with other countries worldwide. As well as the EU Customs Union, the EEA Agreement does not cover the following EU policies: Common Agriculture and Fisheries; Common Commercial Policy; Common Foreign and Security Policy; Economic and Monetary Union.

Unlike the EU, EFTA states do not pass legislation.  However, EFTA states who are EEA members must also incorporate some EU law into their domestic legislation in return for access to the EU Single Market.  As they are not members of the EU, they do not get a formal say or vote on this legislation.

There are institutions which oversee the application of EU law in Norway’s, Iceland’s and Liechtenstein’s domestic legislation. The EFTA Surveillance Authority ensures that the three countries respect their obligations under the EEA Agreement.  It has powers that correspond to those of the European Commission regarding surveillance and application of EEA law.  The EFTA Court has the competence and authority to settle internal and external disputes regarding the interpretation or application of the EEA Agreement. The jurisdiction of the EFTA Court largely corresponds to the jurisdiction of the Court of Justice of the European Union (CJEU).

Will the UK leave the EEA after Brexit?

What is ‘Norway Plus’?

In the context of the UK withdrawing from the EU, a ‘Norway Plus’ option has been mooted as a possible scenario for the UK’s future relationship with the EU.  In this scenario, the UK would seek to remain a part of the EEA via joining EFTA.  It is referred to as ‘Norway Plus’ because as well as joining EFTA, under this scenario, the UK would also seek to remain in the EU Customs Union.  EFTA states are not part of the EU Customs Union as outlined above.

The EFTA Convention from January 1960 states that any country may join EFTA “provided that the EFTA Council decides to approve its accession”.  This means that Iceland, Liechtenstein, Norway and Switzerland would have to agree to the UK joining EFTA.