A Fresh Look at the EU Vaccines Strategy 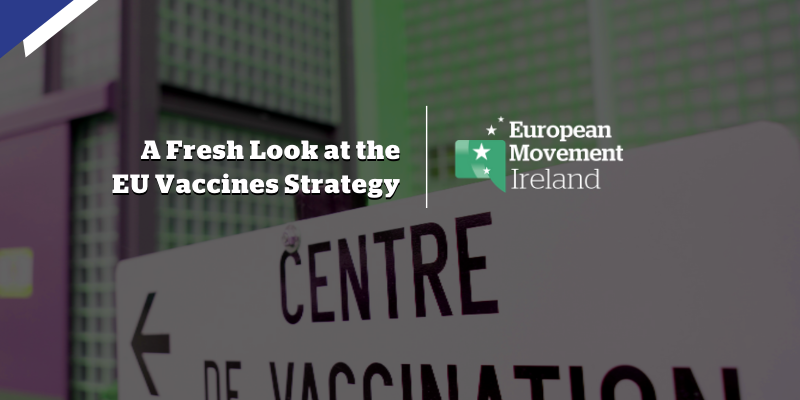 In this Just the Facts, we examine the current state of play of the EU’s Vaccines Strategy, the challenges, criticism and lessons from the EU’s response, and give an overview of the latest key developments including the ‘Digital Green Certificate’.

The European Commission presented its Vaccines Strategy in June 2020. At its core was the aim to “to secure high quality, safe, effective and affordable Covid-19 vaccines for all in the EU within 12-18 months, if not earlier.” The common procurement of vaccines through the European Commission is a core part of the plan.

This involves the Commission entering contracts with pharmaceutical companies to secure vaccine doses which are then distributed to the 27 Member States according to population size. Six Advanced Purchase Agreements (APAs) were signed with some funding provided upfront to finance vaccine production.

The European Medicine’s Agency (EMA) has so far approved four vaccines for use in the EU: BioNTech-Pfizer, Moderna, AstraZeneca and Johnson & Johnson.

Four other vaccines are currently under review – Novavax, CureVac, Sputnik and Sinovac.

The first vaccine doses were administered in the EU in the last week of 2020. However, problems quickly emerged in terms of the availability of adequate supplies of approved vaccines. The initial slow rollout, when compared to other countries like the UK and Israel, led to sustained criticism.

This included charges that the EU ordered too little too late and, when speed was critical, the process was slowed down by prolonged negotiations with pharmaceutical companies over price and liability. Negative comparisons were drawn between the funding allocated to the EU Vaccines Strategy compared to the resources at the disposal of Operation Warp Speed, the US government’s programme for vaccine development and distribution. For example, “the Commission’s structural lack of financial firepower and inability to promptly take major fiscal risks in the pandemic severely hampered its early actions.”

Some of the criticism was justified, however much of it discounted the very particular role of the European Commission and the extent to which it was operating in unchartered territory. The Commission operates within the confines set out in the Treaties. It does not have the resources or authority of a national government and was curtailed further because it lacks competence or powers over healthcare. It can only act in so far as it has been given the authority to do so by Member States. Detailed coordination with the Member States was required because of the EU’s supporting role in public health policy. Put simply, “the Commission had never done pharmaceutical procurement at this scale. The health authorities of the twenty-seven had to be closely involved.”

Accusations that the Commission focused too much on coordination with Member States, on price or on pharmaceutical companies retaining liability are only plausible in hindsight. Had it emerged that it paid over the odds for vaccines or ceded liability, it is also plausible to assume it would have been severely criticised.

Given these impediments, it is arguably impressive that the Commission managed to act as fast as it did.

As of 17 May 2021, 237.5 million vaccine doses had been delivered to EU countries as a direct result of the EU Vaccines Strategy. The target is for 70% adults to be vaccinated sometime in summer 2021. The latest figures can be found here. About 200 million more doses have been exported.

The EU is expected to have vaccinated 70% of its population around the same time as the US, despite a quicker initial rollout on the far side of the Atlantic.

Yet the events of the early months of the year, which led to serious questions about the EU’s approach, shook people’s confidence in the EU’s ability to deliver. EM Ireland’s annual opinion poll, published in April 2021, showed 45% of respondents had confidence in the Vaccines Strategy.

Many of those close to the EU Vaccines Strategy concede that more attention should have been given to increasing production capacity earlier. The head start achieved by the UK and US was in part due to the early identification of production capacity as a priority by public authorities in those countries. However, the unwillingness of both countries to export vaccines also contributed significantly.

The practical experience of the last five months of vaccine delivery in Europe has also prompted a more fundamental shift in strategy. The alleged failure of AstraZeneca to deliver promised supplies and the ensuing row with the company that has led to legal action, combined with the differing public health advice how it and the Johnson & Johnson vaccine can be used has led to a changed approach.

The Commission has turned its focus to the mRNA vaccines which have become “a centrepiece of Europe’s preparedness strategy,” underlined by the fact the Commission has signed a new contract with BioNTech-Pfizer that will deliver 1.8 billion doses by 2023. Recognising the importance of production capacity, the new contract will also “entail that not only the production of the vaccines, but also all essential components, will be based in the EU.”

Another key development is the proposed Digital Green Certificate to “facilitate the safe free movement of citizens within the EU during the COVID-19 pandemic” which will be valid in all EU Member States.  The certificate is digital proof that a person has either been vaccinated against COVID-19 and/or received a negative test result or recovered from COVID-19. National authorities are responsible for issuing the certificate, which can be stored on a mobile phone. It will help to ensure that restrictions currently in place can be lifted in a coordinated manner and travel inside the EU. Ireland will participate and the Government has said the Green Certificate should be operational here by the end of July.

Learning from the Past and Looking to the Future

In September 2010, Council conclusions by European Affairs Ministers recognised “that while pandemic preparedness and response planning as well as implementation remain primarily a matter of national competence to be decided on by Member States, it is necessary to enhance the coordination of these national measures at EU level.”

Reflecting on the current pandemic, President Ursula von der Leyen said in May 2021: “The European Union was not designed to deal with health issues or fight a pandemic.”

Yet the 2010 Council Conclusions did identify the need to develop mechanisms for joint procurement, access to vaccines and better coordination. These are the same areas in which the EU struggled again in 2020. Therefore, an important part of the ongoing response to the COVID-19 pandemic and future public health risks is the need to not just identify lessons but to learn from them and implement solutions as a result, particularly when public and political attention moves on.

It is likely that ongoing vaccination campaigns will be required into the medium-term future and that vaccines may have to be adapted to ensure their effectiveness against variants. Vaccine adaption is not a new concept. The flu vaccine is adapted annually to combat variants in circulation during a particular year.

However, an even longer-term response is necessary. In the US, the Biomedical Advanced Research and Development Authority (BARDA) has been recognised to be an advantage in dealing with the pandemic by accelerating and supporting vaccine development. The EU’s response is the proposed Health Emergency Preparedness and Response Authority (HERA). Its exact role will be set out later this year but it is anticipated to be a “central element for strengthening the European Health Union with better EU preparedness and response to serious cross-border health threats, by enabling rapid availability, access and distribution of needed countermeasures.”

Another important development in the long-term response is the European Health Union. Its proposed measures include strengthening coordination on cross-border health threats and bolstering the mandates of the European Centre for Disease Prevention and Control and the European Medicines Agency.

These and further issues related to public health are likely to feature prominently in the Conference on the Future of Europe.

Although, the EU’s Vaccines Strategy has not been perfect, it is increasingly becoming an effective programme. The speed of the vaccine rollout has attracted criticism some of which has been justified, however the early verdicts declaring it a failure were premature and it is difficult, if not impossible, to identify a viable alternative to a collective approach.